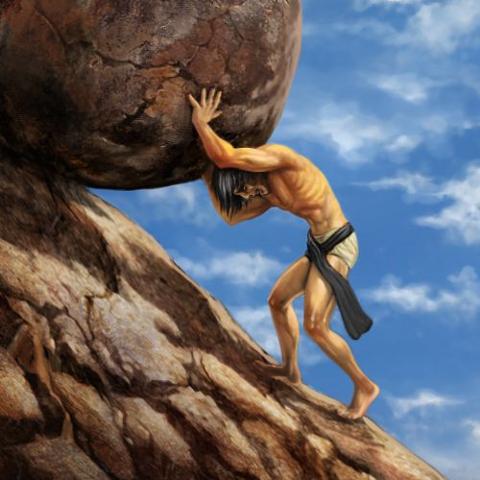 The writer David Collier has managed to get the boulder a little further up the hill with his voluminous report on the secret Facebook group called Palestine Live. We are 3 years into this Corbyn shambles and experience tells us that the boulder is probably due to roll straight back down again. We’re condemned to keep pushing it all the same.

Palestine Live was a river of filth. Innumerable and relentless comments and posts of extreme, and often violent, antisemitism. These included flat-out Nazism, links to David Duke, your standard conspiracy theories, holocaust denial, in short, the complete smorgasbord of Jew hatred. Seemingly, that wasn’t all there was but there was more than enough of that to make it transparently clear the group was a place where people should feel comfortable spewing racial hatred.

Jeremy Corbyn, the now leader of the Labour Party and prospective prime minister, was a member. So were other Labour MPs, many other Labour members, some journalists, a Liberal Democrat MP and peer, and various members of charities and political action groups.

As Collier is keen to make clear in his report, membership of a Facebook group is not an indictment per se. People can add you as a member without your consent and you may never look at it again. Earlier this year the Tory MP, Dominic Raab was reported to have been a member of a private group with extreme views on economics and welfare and he claimed to have not been aware he had ever joined. He deserves the same charitable acceptance of this claim as many of the members of Palestine Live do. It should be noted that not all people saw fit to grant this and operate from stricter standards:

If Owen Jones was at all consistent he would be naming and shaming the likes of fellow journalist Paul Mason who was also a member of Palestine Live but seemingly never engaged with it. I am not expecting such a statement from Jones.

Corbyn was not just a member, he wrote underneath posts and helped organise events within Parliament at the request of members. Specifically he was in contact with the founder of the group, herself a clear antisemite. Corbyn cannot say he was in the group unknowingly or by accident.

Here he joins a thread below some of the milder material from the group but nevertheless material poor enough to require a response. 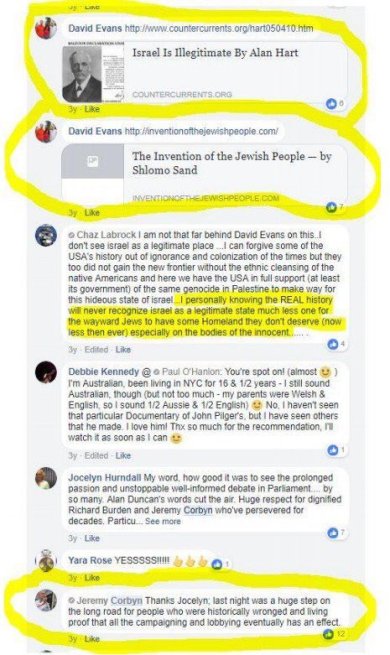 The workings of the Facebook timeline these days are a mystery to me. I cannot say what he did and didn’t see. But he was there for years. People on his staff were in the group. He stayed there until just after he became leader, when professionals were contributing to his image control and the stakes were suddenly much higher.

When an exposé like this emerges we have come to expect the ‘whatabout’ questions. Uncomfortable things are believed easier to dismiss if a credible equivalent from opponents can be found. I have tried to predict what would come up. And I’ve got nothing.

If 100 Britain First supporters organised a get together with 100 from Stormfront, got themselves good and drunk, and then posted constantly for several years, I would imagine similar content. But I cannot imagine Theresa May ever being a member. I would also expect any non-loon who found themselves in the group through no fault of their own would, at the very least, leave immediately after taking a single glance. Perhaps the Right is more on its guard because it is aware of the risks and perhaps the current Left is still so certain of moral rectitude they cannot see their own racism for what it is. I cannot be certain about that but I simply can’t believe there is a direct equivalent to this in the current Tory party.

To raise the issue of Corbyn and his associations is to be immediately asked ‘so you’re saying Corbyn is an antisemite/racist/neo-nazi?’ There are countless examples of this:

If a child is being snatched across the street and you do nothing, you offer no assistance and raise no alarm, and people then castigate you for your cowardice, the response “are you calling me a child snatcher?” isn’t a particularly valuable one.

I don’t see people directly accusing Corbyn of being a racist or an antisemite and to do so is to invite a wave of out-of-hand dismissals. The quest to find the ‘smoking gun’ which shows Corbyn to be such a person is a forlorn one. Because I don’t believe he is one. In the same way I don’t think he ever directly stated support for IRA murders or would ever have been paid to be a traitor in the cold war. But is there not an accusation to be made for offences below this high bar? Are there still criticisms to be made, ones that speak more to who Corbyn is and what he’s about? If so, what are we accusing Corbyn of?

The first charge is of dishonesty. I previously wrote about how for all the talk of Corbyn’s lifelong fights against antisemitism he doesn’t ever seem to have done anything. He’s AWOL from the fight. If he wants to sit back and let the antisemites do their work unhindered that’s up to him but he shouldn’t be allowed to take the glory of fighting them too.

With this charge necessarily comes that of dereliction of duty. He couldn’t lift his fingers to the keyboard to type in that thread ‘hey, steady on, guys’? This is a betrayal of the history of his party. A history that Baroness Chakrabarti made great use of in her Antisemitism Enquiry. By his lack of deeds shall ye know him.

Corbyn is using Nelsonian knowledge. He has consistently put the telescope to his blind eye and declared not to see what is obvious. Except unlike Nelson, not in a good way.

In Catholic ethics there exists the principle of ‘vincible ignorance’. This is the commission of sin due to an ignorance which could have been alleviated by expected and reasonable diligence. This is what Corbyn is guilty of. Carefully maintaining an ignorance while harm is being done.

It should not be ignored that Corbyn’s membership of this group is not a freak occurrence. It is part of a clear pattern. He has enjoyed the vast benefit of little doubt for too long. Surely now blanket denials of a problem are unacceptable?

If supporters wish to ask ‘can you seriously believe Corbyn could do things as bad as this?’ then they should also ask themselves ‘is Corbyn really that supernaturally stupid?’ His pathology is not easy to figure. Perhaps when he sees antisemitism he imagines the trauma which has caused it. The more antisemitic the person the more Israel has driven them to be that way. The more it is attacked the more guilty it is. Not for Corbyn the simple retort that ‘anti-Zionism does not equal antisemitism’ but ‘the more antisemitic you are the more the Zionists have oppressed you’.

For some time now we have heard members of Corbyn’s circle, and countless of his supporters, deny the existence of the problem or at least seriously downplay its extent. “In my X years in the party I have never ever seen…” etc. Collier’s report lays clear the problem in such a way that this simply cannot be allowed to wash anymore. The problem was so easy to find for these people as so many of them only needed to look at their own Facebook feed. They can’t get away with this anymore.

Others, like Owen Jones, have talked a good fight then shirked the responsibility the moment it got personally difficult. In previously excusing Corbyn, Jones suggested there is an unfortunate minority within the pro-Palestine movement and due to that, one “will risk meeting or sharing platforms with people who indulge or possess anti-Semitic views”. Collier’s report has demonstrated that this isn’t some random and unavoidable risk like a school teacher catching a cold from a pupil. The culpability is far stronger.

None of the 3000 members of this group saw fit to expose it, to kick up a fuss, to do anything. Not Corbyn, not his staff, not the other Labour members or countless others. They can’t all have been blind to it. The sickness then is real and it is deep. As David Collier put it in his Jewish News piece,

Imagine just for a moment, the racist obsession of this group was not Jews, but another minority group. Thousands of disgraceful, racist posts all targeting one specific community. What normal person would ignore them or pretend it wasn’t really that serious?

The argument over antisemitism and Labour has developed to a stage where to suggest there is a problem is to attack Corbyn. In response his increasingly cultish supporters circle the wagons. The strength of the denialism is obvious and intractable. Work to address this needs to come from those who cannot simply be written off as anti-Corbynites. There are few people on that list but at the very top is Corbyn himself. He could do so much to help end this tide of hatred that Collier’s report so clearly demonstrates exists. He could silence the excuse makers and the obfuscators and bring much relief to the Jewish people in his party and his country. What price he will once again put the telescope to his blind eye and do nothing at all?