If you considered the January 2015 attack on the offices of Charlie Hebdo to be of importance to free speech; if you thought the murdered brave, and the dissemination of the work for which they were murdered important, then Glenn Greenwald has some news for you: You’re a hypocritical liar who enjoys picking on Muslims and only purported to believe these things to further an aggressive, militaristic, and anti-Muslim foreign policy.

Charlie Hebdo may now be criticized because they mocked white Texans rather than Muslims. https://interc.pt/2gppIfu  by @ggreenwald

I say ‘news’ but this is the same line he has been advancing since two days after the attack. He trotted it out it again for the 1st year anniversary. Now he’s had another go, only this time Greenwald has a slam dunk argument. Some people didn’t like their post-Hurricane Harvey cover cartoon:

What happened here is beyond obvious: Charlie Hebdo was fun, delightfully provocative, bold, and deserving of awards when it was publishing mockery of Muslims. When its cartoonists began publishing exactly the same sort of thing aimed at white Americans, they became “vile,” “evil,” “despicable,” “losers,” and “traitors.”

In making his latest argument, Greenwald again relies on a recurring set of false premises and assumptions. Although these have been addressed previously they are important to revisit. They are:

In his 2015 piece, which he referenced in his latest, he wrote:

Some of the cartoons published by Charlie Hebdo were not just offensive but bigoted, such as the one mocking the African sex slaves of Boko Haram as welfare queens…Others went far beyond maligning violence by extremists acting in the name of Islam, or even merely depicting Mohammed with degrading imagery…and instead contained a stream of mockery toward Muslims generally…

Greenwald’s inability to parse satire is enough to engender pity for the man. Unless, of course, he is actually able to understand the silliness in applying a literal reading to satire and is simply being dishonest. Perhaps he knows full well that Charlie Hebdo were not attacking “Muslims generally” but merely Islamists and the tenets of religion—I lean towards the latter. Society frowns on mocking a people more than it does a belief, and so Greenwald insists they were mocking a people. I believe the process runs thus: I don’t want to be on the same side as those supportingCharlie Hebdo. Racism is bad. Ergo, Charlie Hebdo were racist. This mischaracterization of Charlie Hebdo allows Greenwald to proceed with his argument and makes any defence of them that much more difficult.

2: Anybody who says they approve of Charlie Hebdo‘s cartoons, but doesn’t approve of racism and antisemitism, is a hypocrite.

Having falsely established that Charlie Hebdo were just picking on Muslims, he can lay the charge of hypocrisy upon anybody that has ever objected to any other speech. As I previously wrote:

He is pretending to make the following point:

But what he is actually saying is:

“If you thought that Charlie Hebdo were right to draw Mohammed then you can’t object when others are racist.”

3: The murder of the cartoonists was a reaction to the oppression of Muslims and not to Blasphemy.

Declaring his political enemies supporters of racism is useful in of itself but the blurring of religious satire with racism and hate speech is important to Greenwald for another reason.

Previously in Quillette, Jamie Palmer correctly wrote of Greenwald’s understanding of Western foreign policy and Islamist violence that, “He finds it more convenient to prejudge the former as invariably malevolent, and the latter as invariably reactive.”

To accept that the attackers of Charlie Hebdo committed murder for their stated reasons, to avenge the honour of the Prophet, is to accept the existence of a problem of ideas. If, however, Muslims generally are being harassed, mocked, vilified, and bullied then violence from their quarter can still be explained via Western sins. Of course, Greenwald will offer condemnation of the murders but he can and will never do so with an accurate assessment of their origin. Even such mild complexity as this renders his worldview, and that of his adoring audience, hopelessly compromised.

4: The call to demonstrate solidarity by republishing the cartoons is a call to express support for the content—

It was no longer enough to defend someone’s right to express their ideas while being free to condemn those ideas themselves — long the central tenet of the free speech movement (I defend their right to free speech even while finding them and their ideas repugnant). In the wake of the Hebdo killings, one had to go much further than that: It was a moral imperative to embrace and celebrate the ideas under attack and to glorify those who were expressing them, even to declare ourselves to be them (#JeSuisCharlie).

In all his pieces on Charlie Hebdo, Greenwald posits the existence of this ‘new rule.’ It works on the assumption that to share the content is to approve of it, to celebrate it, or to ‘adopt that speech as one’s own.’ Furthermore, it requires you to accept that this is the purpose of the ‘new rule.’ This is a complete strawman.

The case for sharing the content is about violence prevention. As I wrote on the afternoon of the attack:

If there is an answer it seems to be one of two options. In brief they are:

Option 1: Stop offending Muslims by satirising their religious beliefs and appease the demands of the violent.
Option 2: Show solidarity and publish the offensive articles whenever and wherever possible.

I won’t waste time by explaining why I think Option 1 is a non-starter. I will further state that I know of no Option 3 and am open to suggestions. Option 2 is based on sharing the risk, dissipating it, and in so doing rendering such specific attacks so pointless as to be unworthy of the effort.

I offered this as a principle:

Once art/writing/satire is threatened with violence and murder it becomes important beyond its content.

Countless other pieces have explained why the sharing of speech threatened with terror— especially terror from a force you cannot vote out or compel to amend laws—is important for reasons beyond approval of the sentiment expressed. It demonstrates defiance to threat, it shows that the violent action is pointless, it spreads the risk by increasing the number of targets. Charlie Hebdo‘s staff were threatened, attacked, and then finally murdered. For blasphemous cartoons. Look there for the reasons of demonstrating solidarity not at some bizarre concept of enforced approval.

The most impressive aspect of Greenwald’s latest piece is that he manages to write over 1000 words on this without mentioning the reason why the post-massacre cover is different to the post-hurricane one. Namely, the continued threat of murder. It’s incredible that he thinks we won’t notice.

Only when you pretend that advocating solidarity with murdered cartoonists means you are demanding people agree with all the points made by the cartoons and their method, can you try what Greenwald does. And despite a great deal of effort spent convincing people to share his pretence, he utterly fails. So when he offers up the following two tweets to compare, one is left with an overwhelming sense of “meh.” 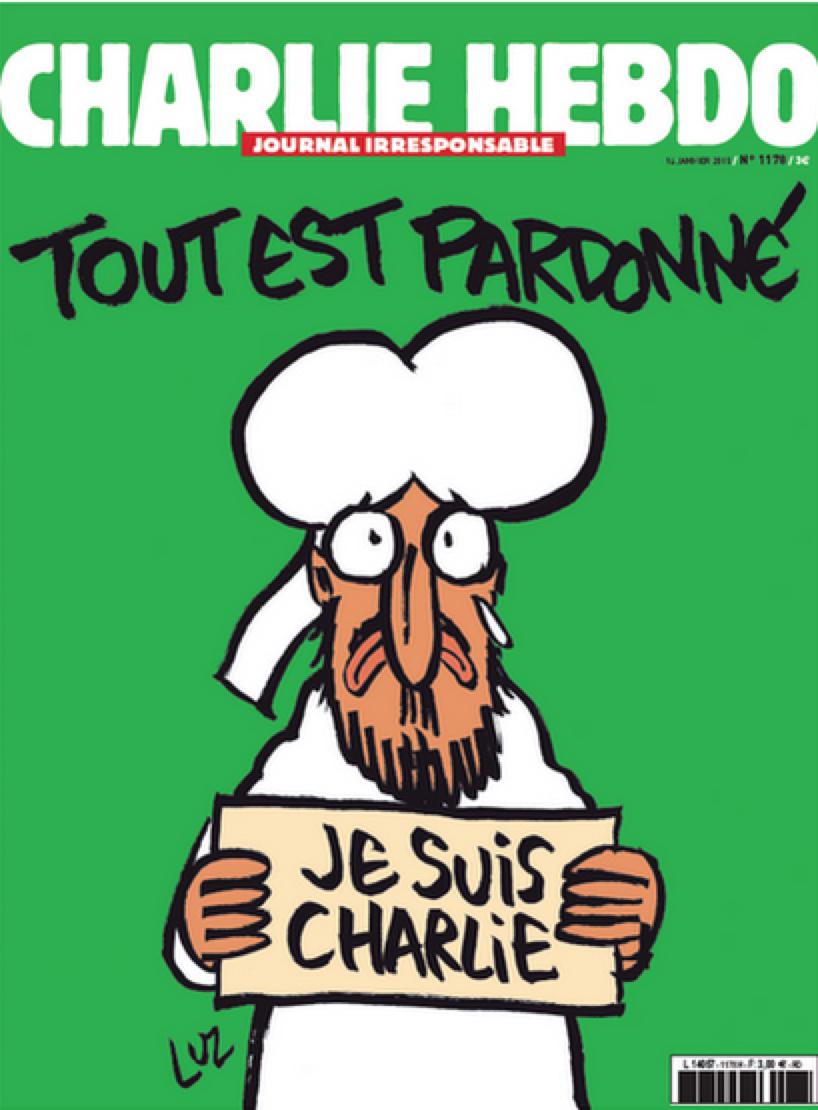 BREAKING: The brilliant new cover of Charlie Hebdo. I suggest the entire world retweets this. 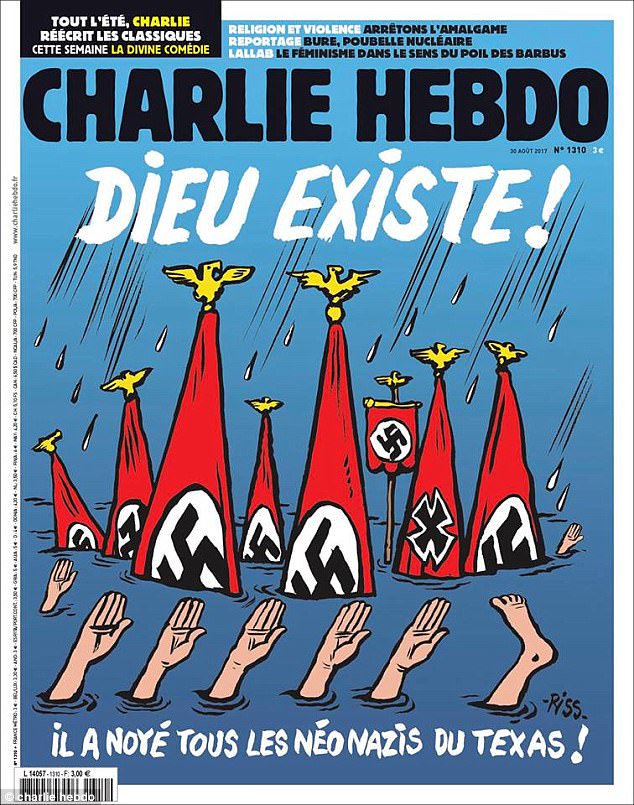 This Charlie Hebdo cover on the Houston disaster is, even by their standards, absolutely disgusting.http://www.dailymail.co.uk/news/article-4839070/Charlie-Hebdo-depicts-drowning-Harvey-victims-neo-Nazis.html …

Even when gifted with a man who will say anything depending on the weather (such as Piers Morgan), Greenwald fails to demonstrate his point of hypocrisy.

Imagine, for the sake of argument, that you too are utterly incapable of understanding satire and believe that, with literal intent, Charlie Hebdo were

…depicting drowning victims of Hurricane Harvey in Houston as being neo-Nazis, with the banner that declared “God Exists”: because, needless to say, white people in Texas love Hitler, and it’s thus a form of divine justice if they drown.

Now ask yourself how displeasure at that cover demonstrates that you are highly selective about the principle of solidarity or/and just want to bully the Muslims and make new Gulf Wars easier? Is there no other difference between the two covers, and their context, other than that one involves a brown person and the other white people?

The point of the requests to share, to help dissipate the threat, does not apply here because firstly, and hugely, there is no threat. And secondly, note that of the six people Greenwald quotes as expressing disapproval of the Texas cover, five share the offending picture as they do so. Again, as I wrote previously:

You can claim that some of what Charlie Hebdo did is bad (I don’t), even that it is anti-Muslim (I don’t), and still completely agree that the specific work they were killed for, namely the blasphemy and religious mockery, is distinct and of value. It is even easier to make the case for supporting it and disseminating it when it is threatened by violence.

If, after the Charlie Hebdo massacre, news outlets around the world had defied the threat and published the cartoons with the caveat that they were neutral about the content, then they would still be adhering to what Greenwald calls the “long the central tenet of the free speech movement (I defend their right to free speech even while finding them and their ideas repugnant).” And the people who advocated dissemination would be content. Though many people–including myself–approved of the content, it is simply untrue that the calls for solidarity were based on forced approval.

Like a sub-prime financial product, Greenwald piles up bad faith upon mistruth and packages it into an argument hoping to convince you that the whole has value.

He describes the obvious nomination of Charlie Hebdo‘s staff for a courage in free speech award as “lavishing these [murdered] cartoonists with honors and prizes.” He characterises a tactic of harm prevention as a demand to love the content. He ignores the critically important threat of violence in the hope you won’t notice. He pretends blasphemy is hate speech. He does all this so his playschool view of international affairs, West = Evil, Others = Good, can hold together just a little bit longer.

Once again, this requires him to tell lies about a bunch of deceased, shabby soixante-huitards. With clumsy sleight-of-hand, he makes the anti-racists racist and the anti-imperialists imperialists, and anybody disagreeing with this must be war crazed, Muslim-hating hypocrites. Fortunately, the longer he continues to try this the more ridiculous it looks.

4 thoughts on “Glenn Greenwald is Wrong Again on Charlie Hebdo”