Despite the forlorn wishes of many, 2015 has begun where 2014 left off. 12 lie dead in Paris and the fight which appeasers and apologists pretend is a mere reaction to the original sin of the West continues to be a multi-generational fight for civilisation. Barbarianism (them) versus enlightenment (us).

However, the Paris attack was not seeking the maximum number of random civilians dead, it was a targeted assault on a specific organisation. Namely the offices of satirical newspaper Charlie Hebdo. Anybody with access to news over the last decade won’t be surprised by this. It isn’t quite run-of-the-mill but nor is it the bolt from the blue. And that itself is surely bordering on the surreal. This description bears repeating. Men armed with assault weapons massacred those in the offices of a satirical magazine. In Western Europe, in 2015. A satirical magazine. This is our current reality.

If it had been a maximum random casualty attack you still would have had the same cretinous apologists forgetting that France opposed the Iraq War and gluing the attack onto their narrative of enlightened self hatred.

We avenge the Paris horror with more tanks at our peril:The abuse of indigenous muslims in the Iraq and Afghan wars have done us no favours

A few others would have spoken of the alienation of post-colonialist ‘others’ living in France or some such, likewise pushing the blame onto those without their fingers on the triggers. Apart from this there would have been little else other than mass condemnation and the harsh acceptance that this is just how the world is right now. But, this was not a general attack on Western or French society it was, as mentioned, specific. The targets were guilty of religious offence or, in the case of the police, protecting those guilty of religious offence. This specific target causes us to asks specific questions. Journalist and author Guy Walters (@guywalters) posed such a question succinctly and quickly.

If there is an answer it seems to be one of two options. In brief they are:
Option 1: Stop offending Muslims by satirising their religious beliefs and appease the demands of the violent.
Option 2: Show solidarity and publish the offensive articles whenever and wherever possible.

I won’t waste time by explaining why I think Option 1 is a non-starter. I will further state that I know of no Option 3 and am open to suggestions. Option 2 is based on sharing the risk, dissipating it, and in so doing rendering such specific attacks so pointless as to be unworthy of the effort.

In my last piece here I addressed the issues surrounding The Interview being withdrawn by Sony, I said:

Upon reading their press release I was instantly struck by the similarity with the Danish cartoons incident of 2005. Those cartoons may well have been things that most news organisations would not wish to publish, however the moment people threatened and indeed proceeded to kill over them, any news organisation worth its name had an obligation to publish. Firstly because it is news, but secondly and I suggest more importantly, as an act of defiance to the threat, of solidarity with the threatened and to ensure that the most ugly of precedents is not set. However, almost no organisations published the cartoons. And the reason most commonly given was that they had a duty, a paramount interest if you will, to the safety of their staff.

The excellent Stephen Pollard (@stephenpollard), who writes for the Jewish Chronicle, added flesh to the dilemma and shows that my easy announcements are indeed more complicated than perhaps I grant them:

Easy to attack papers for not showing cartoons. But here's my editor's dilemma. Every principle I hold tells me to print them. But 1/2

what right do I have to risk the lives of my staff to make a point? 2/2

A real fear, though, is that the moment has passed. The Danish cartoons situation was the moment to choose solidarity and not individual Human Resources responsibilities. And it was to that specific situation I lament the lack of a collective response. Perhaps we have already lost?

In general, but with shameful and notable exceptions, the reaction to The Satanic Verses was one closer to Option 2. In general, with the Danish Cartoons, we chose Option 1. A brave and notable exception was Canadian, Jewish and conservative commentator Ezra Levant. He chose to publish the cartoons via his magazine, The Western Standard, and for his troubles was hauled before the Alberta Human Rights Commission under threat of a publishing ban (for the uninitiated, Canadian Human Rights Commissions are Orwellian ersatz courts arbitrating between various group rights without offering due process by any accepted Common Law norms). I recommend viewing his series of videos from his deposition.

When Yale University Press announced that it was to censor the Danish cartoons of Mohammed from their book about the Danish controversy he wrote a piece which included the following:

I’ve said it before, and this is depressing proof of it: the fatwa against those cartoons, issued on the streets of Damascus and Tehran, did more damage to our North American culture of liberty than did 9/11 itself.
9/11 killed thousands of people and cost countless dollars. But other than those who were killed that day and their families, and those in our volunteer armed forces, 9/11 really didn’t change our lives other than perhaps the frustrating kabuki we go through at airport security. What’s different in our daily lives?
The Danish cartoon riots, though, had an enormous effect. They planted seeds of fear in the minds of thousands of editors, publishers, producers, journalists, professors, politicians and other “public intellectuals” — the dealers in ideas, the opinion leaders. They have chilled the intellectual climate of the West.

He’s onto something. But lamenting the cowardice or/and misjudgment of the past does not answer Guy Walters’s question of what to do today. We are where we are.
Stephen Pollard again:

The second post is apposite. Although I am not anonymous I don’t have the same responsibilities that editors of organisations do. Being a journalist is a pretty cool job. People long to be in the profession, they get to feel warm and fuzzy about themselves and are elevated when asked at a party the recurring question ‘so what do you do?’. They reward themselves for ‘telling truth to power’ but as Mark Steyn said, “If you’re going to be provocative, it’s best to do it with people who can’t be provoked”. The test is how you act when faced with the murderously provocable.

Except, it isn’t just the people that get to feel good about their privileged occupation at risk here. An editor making this decision for free speech is not just endangering the journalists, but their office cleaners, the agency hired IT repair guy, the people milling past the office and the police units that respond. Do they have the right to put them in the path of danger?

Surely we are also asking if they have the right not to? Can they hold the privileged power in our society without making those decisions also, and if I am milling past their office when an attack occurs why am I, as part of this society, not also obligated to take my share of the risk? When the untenable Option 1 is the only other solution we have to accept this risk, do we not? The standard rhetoric that Western civilians targeted in attacks are merely innocent victims never sat entirely easy with me. In taking advantage of our own freedoms we have to accept the risk and responsibilities of exercising them. This isn’t merely a burden passed on to those in uniform we pay or those who write what we read. It is surely the unfortunate price of living un-cowed with the responsibilities of freedom. We are non-fighting combatants. Our enemies have made the choice that our very lifestyles are acts of war. It is wrong, they are wrong, but it is so.

Tough talk, easy to write from my desk, and pronouncements of a shared burden may ring hollow when the risk is disproportionately shared but until I personally fail to live up to it, it must remain my default position. The cellular and rational response of individual priorities is what has helped lead us to this impasse.

Stephen Pollard’s reservations are logical and honest. But to follow them through means we will continue to reward thugs. He knows this.

Again, I can’t claim to have taken a big risk just because I choose to end this piece with a provocative cartoon and use my own name. And employing no journalists I bear no direct responsibility for the lives of others. But if we work on the assumption that we will all do the rational (cowardly) thing as a default where does that leave us? But in calling for this boil to be lanced with acts of solidarity am I not phrasing this as ‘suicide pact, you first’?

Well put. No politician will help initiate a large scale change of approach. If Cameron urges all outlets to publish anything offensive the moment it is threatened surely he would be condemed for incitement from all sides? Is this something that should be cross party agreed? Am I really calling for the deliberate mass publication of everything that is gratuitously offensive the moment it is threatened? Yes. But somebody has to go first.

I stand with Charlie Hebdo, as we all must, to defend the art of satire, which has always been a force for liberty and against tyranny, dishonesty and stupidity. ‘Respect for religion’ has become a code phrase meaning ‘fear of religion.’ Religions, like all other ideas, deserve criticism, satire, and, yes, our fearless disrespect.

What does standing with them look like? Rushdie has done way more than his share. But what do the rest of us do? How do we manifest this fearless disrespect?

In this fight for civilisation, the dead in Paris are footsoldiers. They have fought on our behalf by exercising their rights. Armed only with a pencil, they were rewarded first by accusations of racism and then by death.

‘I am Charlie’ seems a hollow parody when considered beside ‘what right have I to endanger my staff?’ Nobody asked to be put in this position when entering journalism, but shit happens. That’s the power, that’s the responsibility. Who are you to draw pay and call yourself part of a free press if you’re willing to allow a tiny French satirical magazine to bear all the risk? How can any of us expect the rights we take for granted by compartmentalising the risk? That’s cowardice.

The ‘editor’s dilemma’ as Pollard puts it has been around for a decade. Most editors have not. If their editor had put them in that position a decade ago they would merely be continuing the condition when it became their turn. And each new member of the organisation willingly starts their job knowing to be under that threat. That becomes a norm, a tradition if you will. One which the uniformed estates of our society have taken for granted from day one. It has to start somewhere and surely it has to start.

Can I condemn the Daily Telegraph for not going first? I have to, because what else can we do? I am calling them cowards and doing so in the knowledge that it could well be staffed entirely with individually brave people whom I cannot hold a candle to. I am doing so knowing it is blissfully easy for me to do so, beyond my personal scruples. I am doing so because what other option is there? 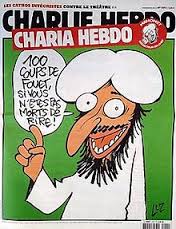 One thought on “Suicide Pact – You First”